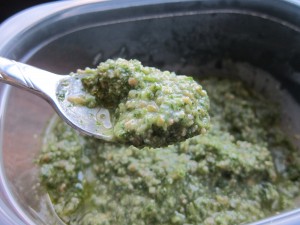 It’s Tuesday night. I didn’t get home until almost 7:30 because the C train was running painfully slowly (water damage on tracks from the rain blah blah…). If I had walked into the kitchen with no plan in mind for dinner, my first move would have been to the phone to order a pizza.

But I had a plan. Last weekend I mapped out what we’d eat each night for dinner this week, made a grocery list and shopped, at the Greenmarket and via Fresh Direct.

I decided that one night this week we would eat a ravioli salad with olives, toasted pepitas, and cilantro pesto from super-blogger Heidi Swanson’s new book Super Natural Every Day. Since making the pesto seemed a little ambitious for a weeknight, I made the pesto on Sunday. I even toasted the pepitas then.

So tonight, all I had to do was boil the ravioli and toss everything together. Bonus: I have extra salad for lunch tomorrow.

This dinner was only possible because of the first commandment of weeknight dinners. If you haven’t guessed, it’s Plan.

I know it’s not sexy, but give it a shot.

I am a natural planner (perhaps to a fault), but I know that it doesn’t come easily to everyone. It’s one of those things that you might need to force yourself to do, at least at the beginning until you realize how far a little planning can take you.

So how to plan? On the weekend, write down what you’ll cook Monday through Friday. Write it in a notebook, on a sheet of paper on the fridge, or on a computer. I keep a Word doc on my desktop called, very creatively I might add, “Food This Week”. Here is a screenshot of this week’s: 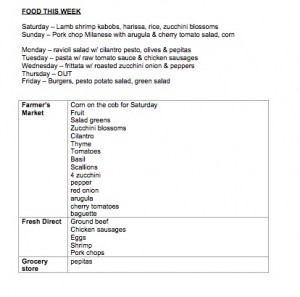 In addition to writing down what you’ll eat each night, make a grocery list, and buy the groceries all in one fell swoop.

If you think that planning every week is too much, put together two or three weeks’ worth of menus and then just alternate them.

I even got a jumpstart on tomorrow night’s dinner while my ravioli was boiling. Because of my plan, I knew that we were going to have a roasted vegetable frittata tomorrow, so I chopped up some zucchini, red pepper, and onion; tossed them with olive oil, salt, and pepper; and roasted them for a half hour. Tomorrow all I’ll need to do is crack some eggs and put together a green salad. 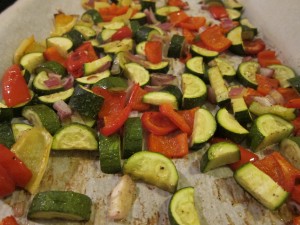 How and when do you plan your meals?

This entry was posted in Blog and tagged Weeknight Dinner Project. Bookmark the permalink.