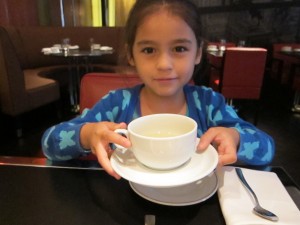 “Chic” is not usually a word I associate with afternoon tea. Instead I think of frou-frou décor and overly elaborate place settings. Don’t get me wrong, I love afternoon tea. In fact, it’s a special holiday tradition in my family and I have no problem indulging in a little frilliness now and then.

That said, it was refreshing when my six year-old daughter, Rosa, and I were invited to try the new afternoon tea service at The Lamb’s Club in Midtown a few weeks ago. The restaurant’s tea service is offered upstairs in the swanky lounge, and the entire experience was sleek and sophisticated, a far cry from frou-frou. This is what tea in New York should be.

The bar at The Lamb's Club - sleek, not frou-frou

Iron Chef Geoffrey Zakarian is the Chef/Partner at the Lamb’s Club and with his team he has put together an elegant menu that Rosa, in a word, devoured. She dubbed the flaky buttermilk scones with raspberry jam, “way better than delicious”, swiped three-quarters of the tangy tuna tartare when I had my head turned, and fought me over the last piece of savory pork terrine. In hindsight, we should have ordered two servings of sacher torte, the Viennese chocolate cake layered with apricot jam and topped with a dark chocolate glaze. 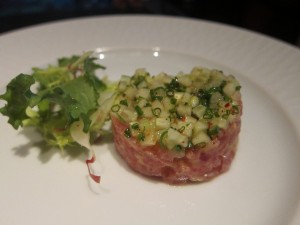 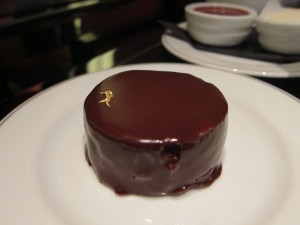 The teas are by Le Palais des Thés, and even the words on the menu describing the teas sound luxurious. Thé de Hammam features rose petals, orange blossom, and green dates. Thé des Vahinés Rooibos tastes of marigold and vanilla. Thé Noir Jukro is redolent of chocolate and honey. See? These teas make me want to use words like “redolent”.

Does all of this sound a little too upscale for kids? Too exotic? Too chic? I don’t think so. Most girls – and many boys – I know like to get dressed up, eat delicious food, and have an exciting Manhattan adventure. Afternoon tea at The Lambs Club is just that, a sophisticated New York tea party, a perfect mother-daughter date.

One of the highlights of our tea was the beautiful egg salad sandwich. If you can’t make it to The Lamb’s Club, Geoffrey Zakarian’s recipe will be a special addition to your at-home tea party (or cocktail party). Geoffrey shared recipes for the egg salad, pickled cucumbers, and tarragon vinaigrette he uses. But feel free to just make one or two of the components. The egg salad couldn’t be easier, and they’re all delicious. 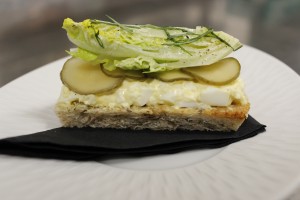 Combine the shallot, mustard, vinegar, honey, yolks, and tarragon in a blender. Start to puree on variable setting, starting low and then increasing to high. Slowly drizzle in the grape seed oil and the olive oil to emulsify. Taste and season with salt and pepper.

This entry was posted in Blog and tagged eggs, Recipe, restaurants, tea. Bookmark the permalink.

4 Responses to Way Better Than Delicious